I use both PowerShell and Bash throughout this post. I tried to distinguish between the shells using symbols from their default values:

If you're thoroughly confused, you can always check the source. Each block is labelled.

I'd also like to apologize in advance for my PowerShell style. I don't have much experience with the shell, so my knowledge of conventions is pretty limited. I've tried to maintain consistent usage throughout, but it's all just my interpretation of what I was sourcing so it could be totally wrong.

You'll need these things before getting started:

You can install Docker and the Docker Engine via your normal choice of package installation. If you're installing Docker on your production server to work with WSL, stop what you're doing, take the time you need to figure out PowerShell, and remove WSL from your production server. Since you're not, and you're setting it up for a dev environment, I recommend installing from prebuilt.

A generic install from a stable package followed by toggling Switch to Windows Containers will achieve the same results. Because I like to tell myself I know what I'm doing, I started out with the more advanced installs and missed that.

I did notice that the provided PATH addition, $env:ProgramFiles\Docker\Docker\Resources\bin doesn't include dockerd. The file, dockerd.exe is actually a directory above in Resources. To confirm,

You can either add $env:ProgramFiles\Docker\Docker\Resources to your PATH or symlink into bin.

This is actually much easier in the GUI. Search "environment variables". It used to involve way more menus.

I recommend going with the symlink because it's a bit more secure. Adding an unknown directory that you don't have control over to your path is, at best, a recipe for spending more time debugging than coding. Docker didn't expose the directory, which means Docker might update the directory with some executables that conflict with the normal path. If you symlink the executable, you're forced to review changes when updates break the symlink. I've checked as much of the source as I can; while Docker didn't expose dockerd, it is used heavily through the documentation, so you can safely export it knowing that your code will break if Docker changes it.

Aside: Things That Didn't Work Initially

but its installation matched almost zero documentation I found. It kept yelling at me when I tried to change hosts and wouldn't load an externally created config (both of which, I later discovered, were actual features of the edge version not covered the now outdated Microsoft docs).

I next tried the official Microsoft docs on manual installation:

This puts docker.exe and dockerd.exe into $env:ProgramFiles\Docker, creates $env:ProgramData\docker, and successfully registers a service via dockerd --register-service. However, I kept getting this error (and completely missed the whole ensure... note):

In hindsight, I think the key was actually installing Docker for Windows through an official source and following the tutorial to the letter first. After getting very frustrated with the choco and manual installations, I followed the MS install guide and was notified Containers would be turned on. I assumed that it had been enabled when docker-for-windows enabled Hyper-V, but I think I was wrong about that assumption. So, if you want to use either one of these options, you should probably start by enabling the features.

Once Docker is up and running, access its settings via the toolbar. You'll need to expose the daemon. You can use the defaults (pictured below) or use secure settings. 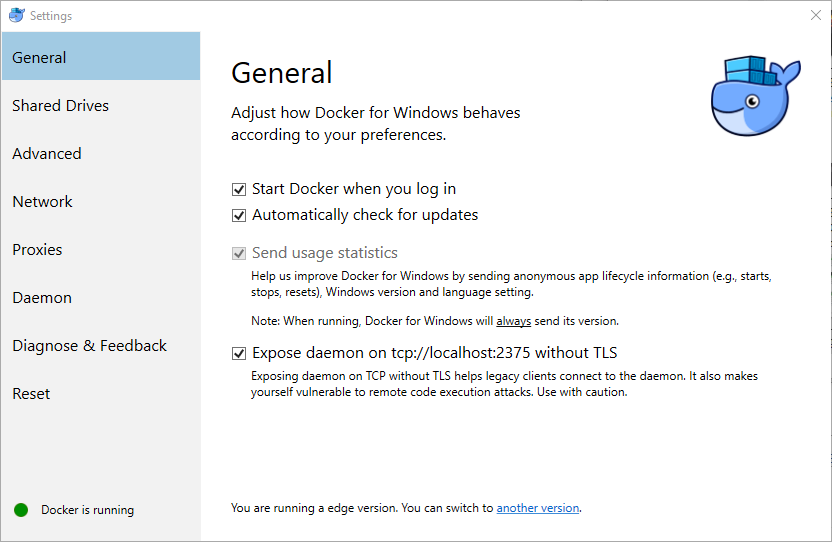 This poses a potential security risk, so be careful. WSL can be attacked. I'd highly recommend you change and secure the port instead (source):

You can use the stable Ubuntu packages if you want. However, the repositories are one major Composer file version behind. Since that might not always be the case, you can check versions like this:

If you're happy with 2, you can skip to Environment.

I used the vanilla python install with Ubuntu on Windows.

If you've got other versions floating around, you probably already know how to handle dependencies. Docker recommends running a virtual environment (bonus: enforce virtualenv usage with pip) to install its scripts. I have no interest in messing with that many environments, so everything after this assumes a global install via sudo -H.

If you don't have pip, you'll need to get that first. From the official repo,

Installing docker-compose by itself should resolve its dependences. If not, you can install as a container.

Because the daemon is running on Windows, not via bash.exe, docker(-compose) won't be able to do things that require a Docker host.

You can either specify the host every time, e.g.

If you went the smart route and secured your installation, you can export the value from the config file in your .whateverrc. Otherwise you can just export the default:

Unfortunately, once it's in the config, you aren't going to get it back out programmatically.

That means you'll have to update it in two places when it changes.

So far, I haven't been able to find a single image whose manifest includes the proper architecture. For example,

Basically, like many current WSL features, Docker support is just a really cool idea that doesn't work. Years of embrace and extend have completely butchered generally accepted higher APIs (I dare you to find in PowerShell), so outside devs porting the containerization at a lower level can't have an easy job. Microsoft is actively embracing containerization, and they're working hard to extend it via Windows Containers using their own proprietary stack. Either you see where this is going or you like Microsoft.

Granted, it's getting a ton of attention and dev focus, so it will probably be implemented sooner than, say, cron support.

Right now, running Linux containers on Docker for Windows does work. However, the Windows configuration file is severely limited. Or, rather, Docker for Windows cannot use hosts, which I find severely limiting. Barring some Windows voodoo that I don't know about, your only option for WSL access is to expose a widely-documented default port without TLS authentication. This really concerns me for a few reasons:

In my dev world, I often reformat and try a new environment. Rebuilding wouldn't be a big deal. However, I also keep basically all config ever in dev, because, unsurprisingly, that's where I develop it. It's already hard enough to stay safe in a Windows world without worrying about exposing myself in brand new ways (in all fairness, Windows Defender does a good job and I don't often leave trusted domains like Steam, GitHub, StackExchange, etc.)

In any production world, that's so dumb it doesn't even merit a detailed rebuttal. If you're running Docker for Windows in production, use PowerShell.

If you don't think any of these issues are a big deal (e.g. dev exists on an air-gapped network that also contains carefully vetted private registries updated via thumbdrive), expose the port. Honestly, the chances of you being attacked are at least as low as a credit reporting agency's database being compromised.

First, I want to point out how awesome the LinuxKit devs are. They're suffering through the pain of figuring out how to do this in Windows so we don't have to. Second, this is only bespoke right now, a few weeks after all the announcements. In two or three years, it might be default.

The LinuxKit preview announcement came with the Linux Containers announcement. With minimal tooling, you can get it set up to run with more recent Windows Insider builds.

A Word of Caution

Enabling Windows Insider changes a few things about your installation of Windows.

I took the code from the announcement and tried to expand on it just a little bit.

If you're using an edge version (e.g. from master) of Docker for Windows, I'd hazard a guess that you don't need to run separate dockerds and can see the features by setting $env:LCOW_SUPPORTED. I prefer discrete copies with distinct names for readability and maintenance reasons; your mileage may vary.

There's plenty that could be added to that script, but I didn't want to spend a Sunday off beating my head against my keyboard over Windows configuration (TypeScript issues, sure, but not Windows config). I started reading the docs on building a service out of commands and my eyes glazed over. Something like this in whichever of the million PowerShell profiles there are could do the trick instead:

Unless you create a service, you'll have to be conscious of the lifecycle of both shells. I feel like an app capable of running each Windows shell will make your life much easier (I like ConEmu). WSL doesn't run in the background, but you can detach PowerShell.

Another option I spent some time investigating is creating a task triggered by an event related to the Docker service. I was able to find a launch event when I bounced the service, but I haven't been able to find anything else. I'm personally wary of just running off the odd launch event, which was fired in my userspace while logged in, so I didn't pursue that.

A dependent service seems to be the best solution. I work with some rad dudes that grok Windows voodoo. If they have any suggestions this week, I'll add some updates (which means if you're still seeing this explanation I don't have updates).

Everything from the native solution thankfully still applies. If you set up a decent PowerShell script and read the host from another file (preferably one that won't get locked by Windows permissions when dockerd-preview starts), you can even read it directly in your .whateverrc instead of maintaining the same constant in two locations.

I wouldn't use either of these solutions in a production environment. If Docker for Windows can safely run not-Windows images in PowerShell, that's a great solution for a ton of business applications, like easily running dev/test builds on a mandated-Windows office network. Natively connecting Docker to WSL is still (probably) a couple of years away. Plus there's the whole WSL malware exploit to address first. Adding a bespoke layer, no matter how awesome the devs are, makes the stack much too untenable. A better title for this post would have been "Why Docker for Windows is Scary Outside of PowerShell."

I'm currently running the bespoke solution on my personal dev box. I don't touch this machine very much outside of the weekends, so it might be some time before I really run it through the wringer. I was originally curious about adding some Dockerfiles to a repo for easy testing/demos. 12+ hours later, I've decided that I really need to spend the hour or so it will take me to finally install Linux on another drive for dev.

If you took something away from this, please take the time to pay it forward. The next time you discover an solution after reading a few threads that didn't have a good/non-deprecated solution, go back and share it in one or two them. 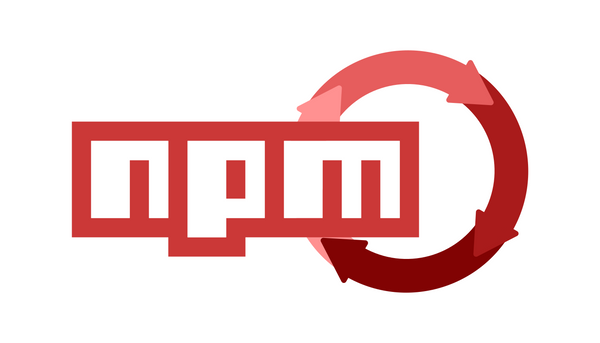 NPM has created a solid set of discrete stages that describe every state a package might be in. Getting programmatic access to that set is more convoluted than it sounds. 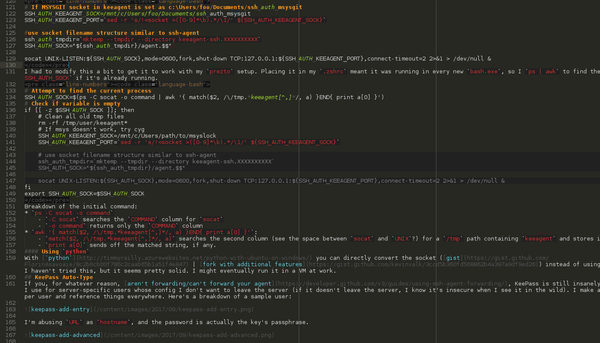 I've begun taking my online identity a bit more seriously and I'm building a collection of keys for everything. It's safe, but it's insanely annoying to have to re-enter all those passphrases more than once, say, a month.