I've stayed away from wxPython in the past because updates were slow and Python 3 wasn't supported. Within the last couple of weeks, 4.0 was completed, which at least answers the Python 3 problem. I've been pounding my head against X11 idiosyncracies all weekend, so I thought I'd take a break and try it out.

It looks like the prequisites were sourced from Debian.

Feel free to skip ahead; the tangent is here because it's funny.

One of the primary dependencies, libwebkitgtk-3.0, hasn't been updated for over a year (in the official repos). If you want, you can install that via something like this:

However, the prerequisites ask for some newer files, so I'd recommend building from source. Get a fresh release from the source and follow the build instructions. There are, unsurprisingly, a plethora of additional dependencies.

I had a really strange issue with libEGL.so.1.0.0 being missing. There were some good threads that sent me down some rabbit trails. I ended up relinking the file because I can't for the life of me figure out why it wasn't rebuilding.

I actually did these steps first. I discovered each of those extra dependencies above the hard way.

It also consumes a substantial amount of storage to build. When you're done, don't forget to nuke the build directory.

Of course, immediately after I did that, I learned why I couldn't find webkitgtk3. It's because webkitgtk4 is in the repos. And a newer release to boot.

Once that's done, you should be able to install wxPython via pip.

Having spent two hours installing this (when it should have taken 30 minutes), I think I'm done with wxPython for the day. More later, most likely.

I might have already installed some of the necessary dependencies and missed them. I did most of an installation in Vagrant before I ran out of memory (wxPython also pegs things out). But actually having webkitgtk4 accessible in the repos made a world of difference.

Some of these might be unnecessary, e.g. you might not need Python 2 unless you work with it.

The old wxPython logo is licensed under CC BY-SA 3.0. The new logo doesn't include a similar CC license in the repo but, at bare minimum, is covered by the wxWindows Library Licence. Stay awesome.

I'm a huge fan of git flow. It's made my life much easier. However, I've noticed recently that, as the codebase grows, features can become disorganized or unwieldy. gitflow-avh solves this problem incredibly well by allowing features to be based off any branch. 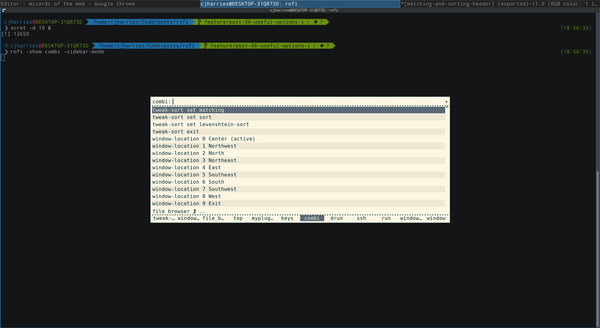 rofi is a neat little tool that does so many cool things. This post highlights several useful rofi options. I don't try to script anything here, so it's a fairly short read.