After a day of furious coding and way more debugging, I think I finally have a collection of git hooks that will properly update badge references. Check out the repo; it's still pretty raw. I've manually tested it with both vanilla and git-flow (if you're not using git-flow, use it). I'll actually flesh out the code later; for now, I'm really excited and wanted to share.

Repo badges are pretty neat. They add (basically fake) authenticity to your code, and (usually) look great. Updating them is a serious pain. For most quick features, you're not touching the documentation overview that contains badges, so you forget to swap the reference. Even when you do remember to swap the reference, you usually forget to ignore the patched hunk. (If that doesn't describe you, then I meant me instead of you.)

I've investigated a few different solutions. Until this morning, I was handling (or, rather, sometimes handling) it via clean/smudge filters. They don't get triggered as often as I'd like, and things got messy. I've looked at all sorts of different githook combinations, but never took the time to make something work. Finally, while writing some totally unrelated code this morning (i.e. a yak shave instead of what I've been trying to write for weeks), a solution clicked.

I wanted to do two(ish) things:

The first was way easier than I thought. The script stores the active branch name (essentially, I believe, the ref in .git/HEAD) in a hidden config file (or quits when it can't be found, e.g. checking out a commit). Via the post-checkout hook, the script compares the stored ref with the currently active ref. If they're different refs, it parses the tracked files. After cleaning badge names, it compares the cleaned file hashes against the real file hashes. If any of those are different, it creates a new commit with a simple "Updating badge references" message (or something like that; I've been working on this since ~7a).

The first suboption was pretty easy too. Using the post-commit hook, the script repeats the same process, creating a new commit if the files are updated. (Possibly; I haven't tested this one very much and I just realized a couple of ways I can break that, I think.)

The second task was much harder. git-merge doesn't work the same way git-commit does (Either that or I don't yet fully grok how pygit2 handles commits, which is a much simpler answer). I had to break it down across a few scripts. Using the prepare-commit-msg hook, the script stores the hook's args to a hidden config file (which actually also happens for any commit, but only merge commits pass merge). The post-commit hook is called as normal, ensuring the original branch's badge references are correct (I suppose it could directly create a commit here which would probably throw off the merge; I'll have to try and break that). Finally, via post-merge, the script loads the last commit (e.g. "Merge branch 'merge-target' into current-branch"), rewrites the tracked files with the correct references, then rewrites the commit (basically git commit --amend except pygit2 doesn't provide an amend API so I had to reverse-engineer one). 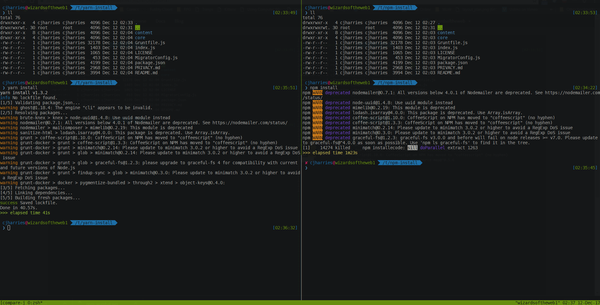 I've worked pretty hard to stay out the whole JS package manager debate. NPM's always done what I needed. Prior to yesterday evening, I had no baseline for comparison. Sure,

I ran into some issues this morning setting up a Xenial box via Vagrant. On boot, /var/lib/dpkg was totally locked with nothing I knew to link it to in ps aux. I've created a fairly novel solution; my purchase today was learn about something new.